When: Annually on 4th August
Where: Agaete & Puerto de las Nieves
How much: free !

We arrived around two and the fiesta was already in full force. Squeezing through the mobs of sweaty fiesteros and fishermen selling eucalyptus branches for 2 bucks a pop, we made our way through the crowded, narrow streets to Plaza de la Constitución,

the heart of enchanting Agaete.

For those not yet accustomed to summer celebrations in Spain, there are three things you can always count on:

La #bajadadelarama is one of favorite #canario festivals. Thousands of people sing and dance amidst the #papagüevos under the blazing summer sun☀️. The procession comes to an end at the small, pebbly beach of #puertodelasnieves 🌊. Here, the locals revive an indigenous #canarii rain dance, where pine and eucalyptus branches are beat against the sea 🌿

Cerveza (Tropical, obvio) in hand and newly lathered up in SPF 30 (I’m still a güiri, after all), we found a stellar spot in the midst of the action, right on Calle Concepción. As we baked away, jumping and waving our branches to the traditional tunes played by the two local bands – La Banda de Agaete and La Banda de las Nieves, we took in the views. Every street was decorated with colorful banners and Canarian flags and every rooftop was filled with friends and families singing along from above. 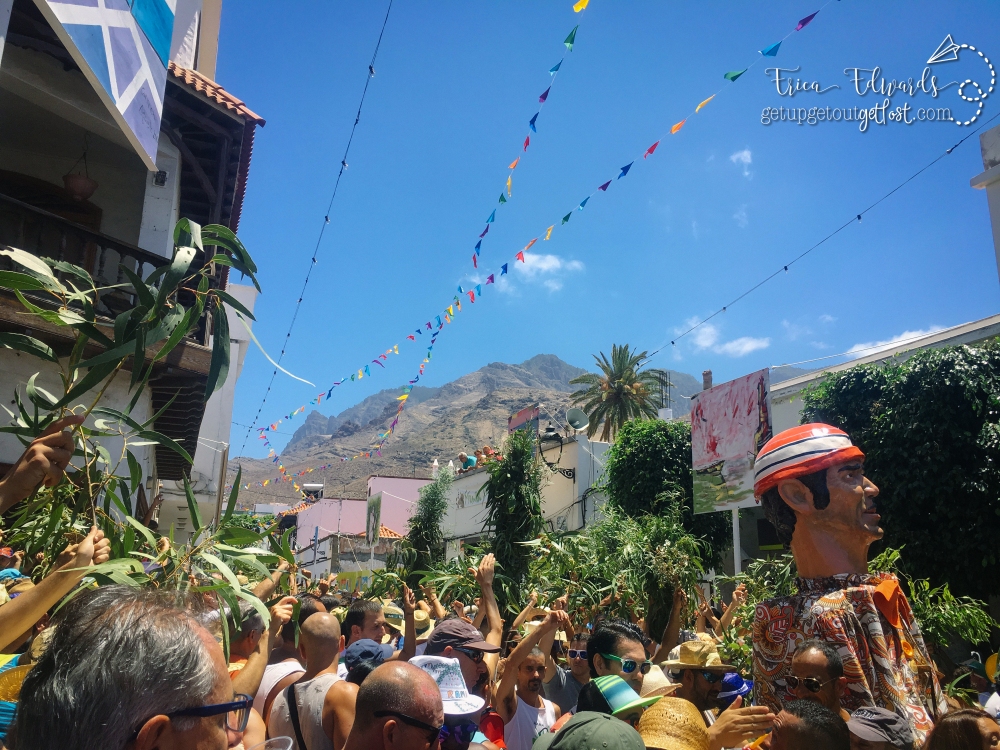 The first procession – La Diana –  had begun early that morning, with the usual group of die-hard locals arriving with their freshly cut branches from the peaks of Tamadaba National Park. As they arrive into town, the band starts to play and early risers make their way to greet them.

The fiesteros were dressed in the typical summer festival uniform – white tanks and short shorts on the chicas and sweaty, shirtless dudes with straw Arehucas hats. And of course, everyone with this years’ biggest (why?) trend (but why?) – colorful sunglass lanyards. 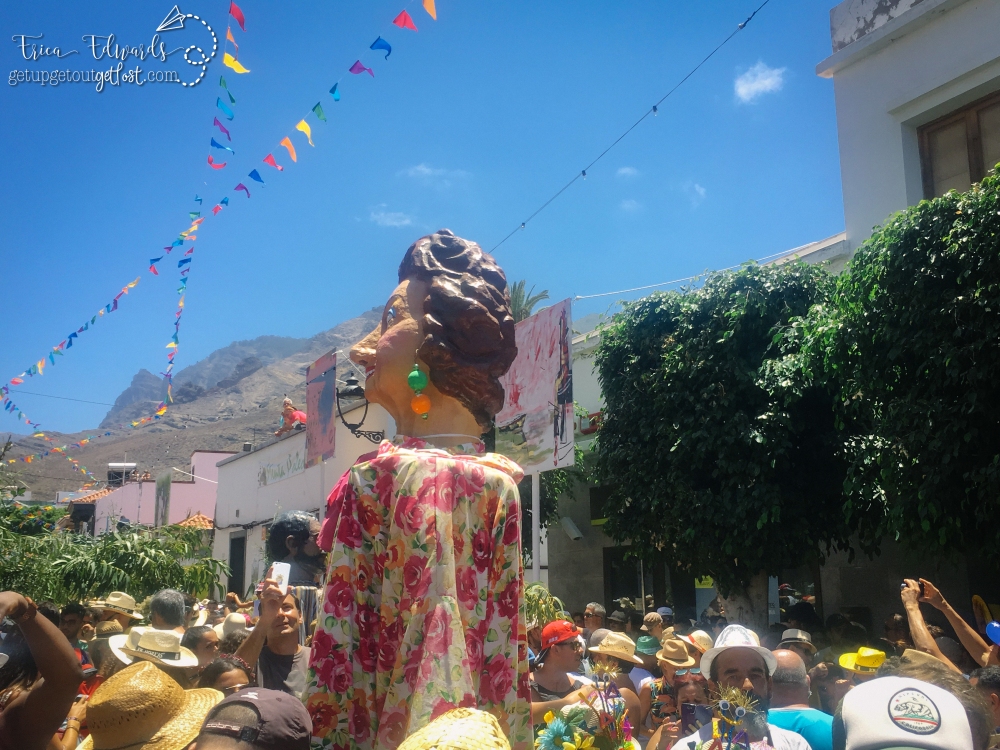 But what really caught my eye were the papagüevos. These oversized Papier Mâché ‘puppets’ are more than just your typical parade décor – the human likenesses are inspired by popular residents of the village. If you peek inside the draped cloth below the giant heads, you can often see that the person inside the caricature is none other than

the very same person who it represents.

One of the most beloved papagüevos is ‘Meri’. The name Meri is a bit of a bastardization that may come from confusion of the inspiration´s actual name – Maggie – or may just be short for Americana. The muse – Maggie Flemming – was a North American journalist who made herself at home in Agaete along with dozens of other hippies from Europe and North America in the 70’s.

Although the tradition is to retire the papagüevos once the real-life version dies, Meri (Maggie) requested that the villagers preserve her likeness so that she could continue dancing La Bajada even after death. And dance, she does 💃!

Following the procession through Plaza de la Constitución, and down the hill toward Puerto de las Nieves, we split off from the suffocation of the barely moving mob to take a dip and cool off in the sea, along with half of the population of Gran Canaria. (This is exactly as sanitary as it seems).

Refreshed and ready for round two, we rejoined the pack on Calle Puerto de las Nieves, just in front of La Ermita de Nuestra Señora de las Nieves (The Chapel of Our Lady of the Snows), where people were already beginning to leave eucalyptus branches in honor of the virgin for whom La Bajada is dedicated.

Just before golden hour, the procession reached the small, stony beach at Puerto de las Nieves to beat their branches against the water. It’s here that you can see the true roots of the festival, which began long before the Spaniards reached the shores of the islas afortunadas.

Local historians maintain that the indigenous Canarii were the first to ceremoniously trek down from Tamadaba with pine and eucalyptus branches. Upon reaching the coast, they would beat the branches against the sea to simulate raindrops, praying for rainfall in times of drought.

As the last pine branches are tossed into the sea, the rhythms from the brass bands of Agaete die down and are replaced by the usual Top 40 hits. DJs mix the latest 🎶Despacito remixes from rooftops above the dancing mobs on Calle de las Nieves and those that realize they haven’t eaten since breakfast pack every square inch of the few restaurants who have chosen to remain open. 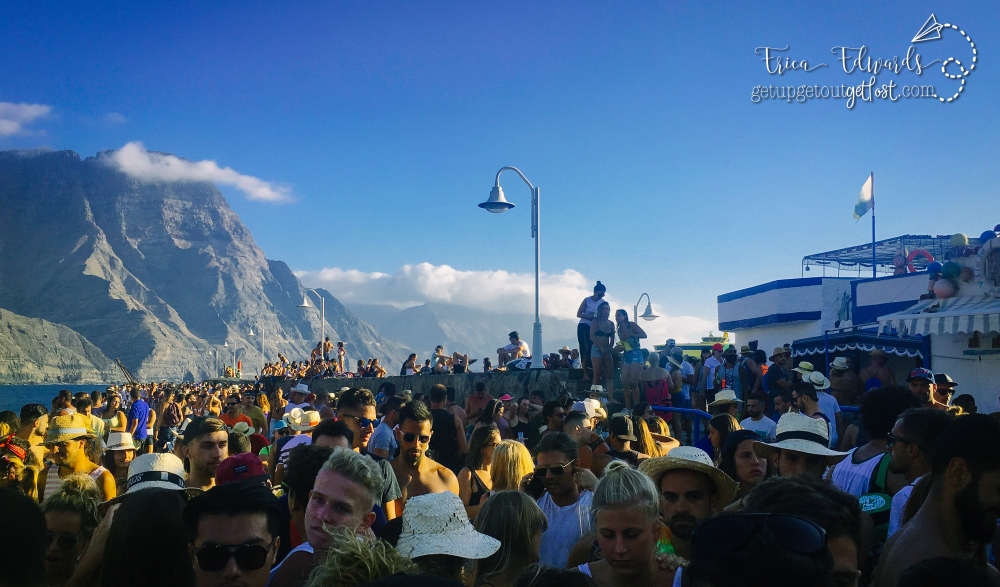 After boogying up an appetite, we headed to the outskirts of the party to grab a bocadillo and watch the sunset over the Atlantic. Removed from the crowds and watching the sky shift from golds to pinks, it’s hard not to fall in love with a village like Agaete. With its whitewashed houses and blue accent doors, the small fishing village in the northwest of the island is often quiet and picturesque, but the locals love a good party and the whole town comes to life when there’s a festival to be celebrated. 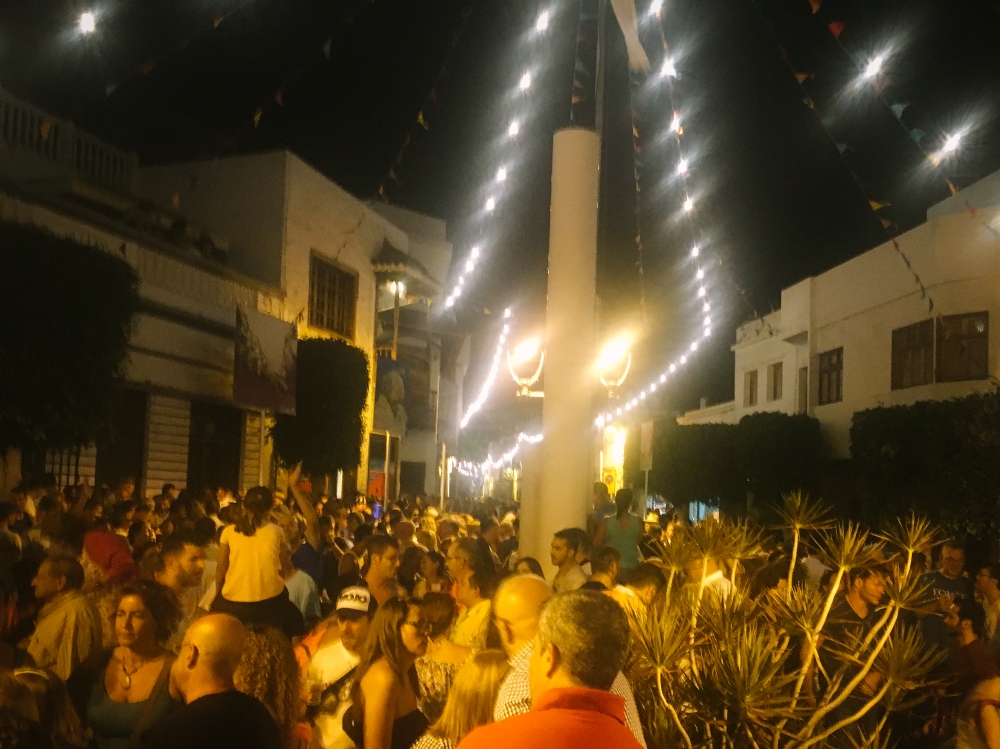 As the sun goes down, the DJ´s turn the music up and the cobblestoned streets of Agaete become outdoor dance floors. The locals start to trade their afternoon cañas in for their gintonics, and families who had gone home to excape the sun start trickling back in. As the children return, you can spot the farolillos and farolas – intricately decorated paper lanterns – in their small hands.

This is the beginning of the end – La Retreta. Around midnight the party quiets down and the salty ocean breeze cools the smouldering streets. The procession of children with their handmade farlillos lights a path along the promenade, and the fireworks – one of the most impressive annual displays on the island – begin to pop, boom and spiral over the sea.

It can be hard to keep track of the multitude of festivals celebrated on any given summer day in Spain, but La Fiesta de la Rama de Agaete is definitely one you don’t wanna miss!

What to Know Before You Go

Agaete loves a good party, so if you do too it´s a match made in heaven! While dates may change from year to year, these festivals are absolutely worth checking out.

And if you´re looking to explore the surrounding area, Charco Azul is an absolute must!