7 Spanish Drinks
You Must Sip On This Summer

Whether you’re desperately trying to beat the heat in Barcelona, soaking up the sun along the southern Spanish coast, or sitting at home wishing you were living the dream in Spain, chances are you’ll be feeling a bit parched this summer.

While there’s no shortage of cerveza and sangria to be sampled, do as the Spanish do and beat the heat with one of these 7 classic summer thirst-quenchers instead! 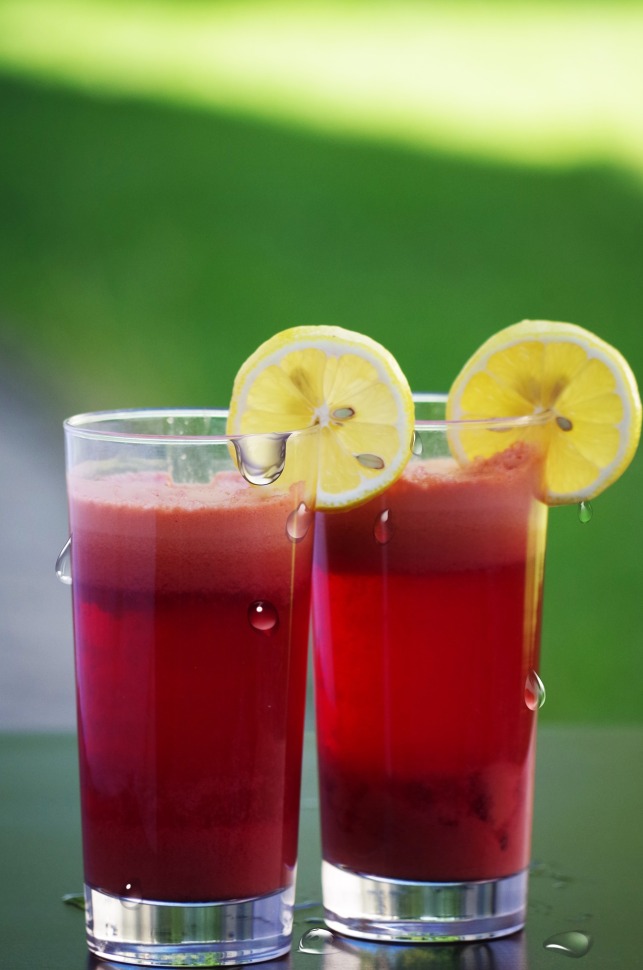 While most of the world considers sangria to be the staple Spanish summer beverage, the truth is that we don’t drink it here all that often (more on that below). The similar-looking bevvie that you see all the Spaniards sippin’ on a summer afternoon is the delicious tinto de verano – ‘summer red wine’.

The tasty tinto de verano can be made with a few different twists, but the standard recipe involves red wine, sweetened soda water and/or fizzy lemonade, and is usually served with a squeeze of summery citrus like lemons, limes or oranges.

Tinto de verano is the perfect pick-me-up for a scorching summer afternoon and can be found almost anywhere, although the recipe will vary a bit from place to place. Here’s mine, and lemme tell ya, it’s delish 😋. Ever wonder why you rarely see inebriated locals, despite the seemingly prevalent social drinking culture in Spain?

Claras are light, refreshing, and perfect for keeping cool without losing your cool on a long afternoon of banter and beverages on a Spanish terraza. Everyone has their own ratio preference of beer to mixer and no one is shy about ordering their clara exactly as they like it (half and half, a splash of lemon, a splash of beer, etc.)

Most of the Spanish domestic beers offer their own version of the clara con limón as well. Guess you’ll have to keep trying them until you find your perfect taste. 🤷

Off the booze? Simply ask for a clara sin alcohol… the same refreshing drink made with alcohol free beer.

For me, nothing evokes the sensation of Spanish summer like sipping a Sunday afternoon vermouth beneath the scorching Madrid sun in a crowded barrio La Latina plaza. Served over ice with a slice of citrus and an olive as garnish, it’s the perfect way to while away an endless summer afternoon.

While most North Americans think of vermouth simply as a mixer to splash on more elaborate cocktails, the Spanish have perfected the art of crafting artisanal vermouths that are not only suitable to drink on their own, but delicious and full of flavor.

Traditionally, the best vermouth comes de grifo (from the tap), but in recent years many distilleries have been working on perfecting craft vermút which is sold in bottles and can be taken home as a souvenir. My favorite is Vermut Malasaña, a 100% artesanal vermouth without added sugars or preservatives.

If you’re looking for something that packs a bit more punch (and with some incredible ambiance!), head down to Madrid’s legendary Casa Camacho in barrio Malasaña. Camacho’s is a truly traditional bar that has been owned and run by a trio of brothers since la movida madrileña in the 1980s and, legend has it, invented the yayo – vermút de grifo with a generous splash of gin.

So, it’s not like Spanish people don’t drink sangria – they just don’t often drink it out at restaurants where it’s likely to be mass-produced and sold from a bottle or tap. The real deal is as incredible as you’ve imagined it – and is lovingly made from scratch.

Real sangria is made with red wine, a variety of fruit such as cherries, oranges, lemons and apples, and a splash of brandy or rum. It’s prepared in advance in a big jug to give the flavors time to infuse and meld together, and is more commonly served at parties or less crowded, non-touristic eateries. If you’re out to eat and overhear a Spaniard ordering sangria at a restaurant, it’s a safe bet that it’s the real deal and not the manufactured stuff. Order up!

When Sunday panic starts to hit and you realize you're on summer vacation 💃👌☀️🌴 I'll have 17 more mojitos please, bartender!

Wanna try it at home? Here’s my easy to follow version of the good stuff. 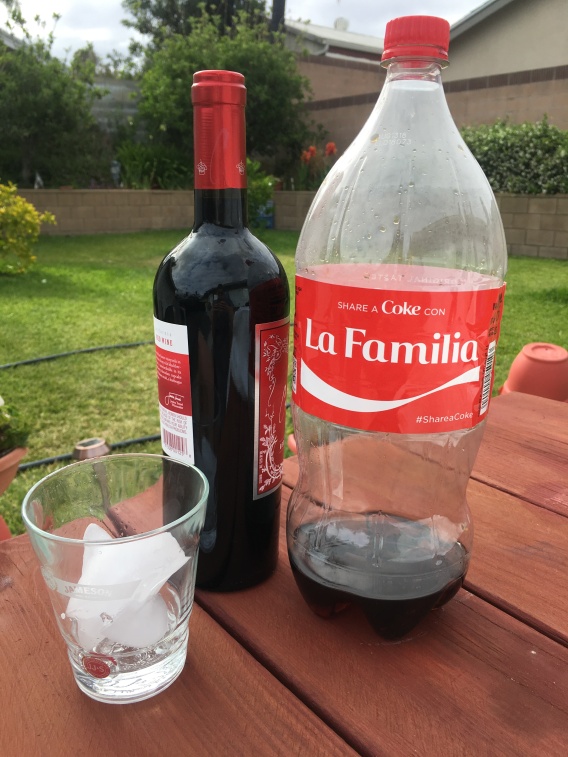 While it’s my least favorite on the list, many Spaniards swear by this mix of wine and cola. My guess is that people drink it because it brings them back to their younger years of botellóning, the long-running tradition of Spanish teens drinking and dancing outside with their friends before they hit the legal drinking age.

This is a very simple mix of either red wine with dark soda (not a fan) or white wine with light sode (much tastier). It’s often a crowd favorite during the crazy summer festivals as a means of diluting the wines potency (and not having to find a bathroom as often as you’d have to if you were sippin’ cerveza!)

Granted, I’ve spent most of the last four years in the Canary Islands so I could be a bit biased on this one, but the sweet and semi-sweet white wine and rosé from the Canaries is a perfect libation to laze the summer days away, whether you’re in the middle of the Atlantic or back in the mainland.

The Canary Islands produce many variations of wine, but to beat the heat I’m partial to the volcanic white wine produced primarily in Tenerife and Lanzarote, the Isle of Fire. Some of my favorite Canarian wines to look out for are Yaiza (Lanzarote), Miradero (Tenerife) and Brumas de Ayosa (Tenerife). 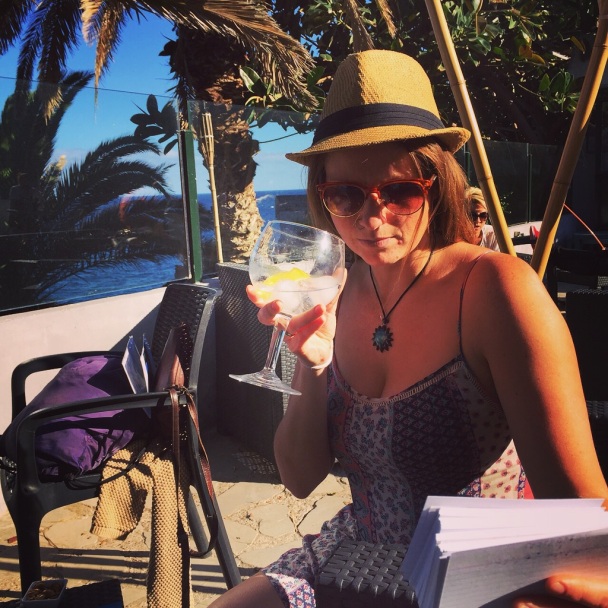 When in Spain, do as the Spanish do.

Gin & tonic has been all the rage in Spain since I moved here in 2011, and it’s not hard to see why… they actually know how to make them properly.

Rather than a splash of tonic and a wedge of lime, here each G & T is artfully crafted with herbs and spices uniquely selected for the particular gin, creating cocktails that are aromatic and flavourful.

While “gintonics” are a popular drink all year in Spain, there’s something particularly refreshing about the mix on a hot summer night, preferably paired with some live music and good banter. If you’re new to G & Ts, my absolute favorite is the Spanish gin Nordes from Galicia, or try Puerto de Indias from Sevilla if you’re looking for something a bit sweeter.

What Will You Sip on this Summer?

Have any other favorite Spanish libations to cool down on a hot summer day? I’d love to hear about them below! Until next time, bottom´s up!! 🍻 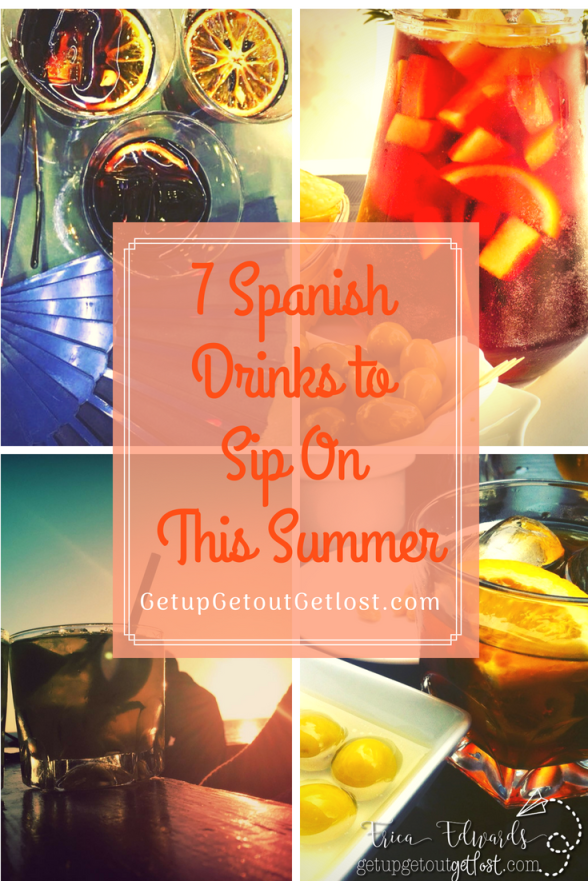