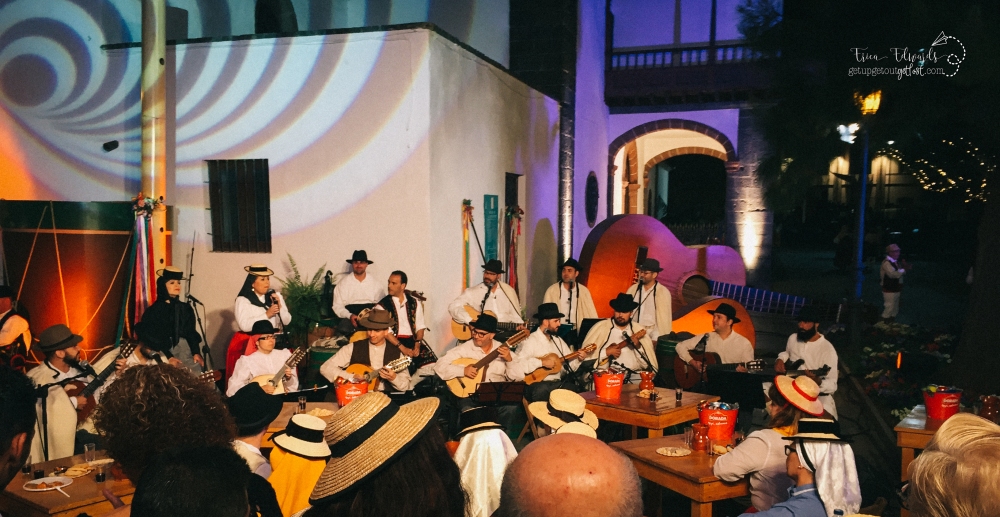 What is La Noche de Finaos?

Over the last few years, the Canary Islands have begun to breathe life back into an age-old tradition that somehow faded away over the years.

La Noche de Finaos is a Canarian custom traditionally celebrated on the 31st of October – the eve of All Saint’s Day (which is celebrated in dozens of countries on 1st November).

Like All Saint´s Day, La Noche de Finaos is a time to commemorate those who´ve gone on before us by remembering old stories, spending time with family and sharing in  nostalgia for those we´ve lost.

Finado: deceased; passed away.
Finao abbreviation of “finado” (dropping the d as is typical here in the islands and much of Spain).

Thanks to a few scattered towns who in recent years have begun to dust off Finaos traditions, La Noche de Finaos is just barely beginning to come back to life for many. In fact, last year when I asked my younger students if they would be celebrating Finaos with their families, they didn´t know what I was talking about.

That was enough to spark my curiosity. So last autumn, I made it my mission to uncover everything I could about this local holiday, and thanks to my Canario friends, colleagues and students, here´s what I´ve found.

Go Nuts 🌰
What to eat on la Noche de Finaos

Gastronomically, nuts are the protagonists of the night.

If you find yourself in a town that celebrates La Noche de Finaos, follow the rich, smoky scent to the open fire and be sure to pick up a cone of freshly roasted chestnuts and blackened corn on the cob. Chestnuts are without a doubt the star of the show, but you’ll also find plenty of sweets made with seasonal, local ingredients like walnuts, almonds, figs and apples.

If you´re lucky enough to be invited to celebrate with a family, you may get to enjoy more elaborate treats like fig and almond cheese, cactus fruit stuffed with almonds, and frangollo – a Canarian specialty of millet, raisin and almond pudding.

And obvio, there will be no shortage of typical Canarian tipple to quench your thirst. Most of the locals will be sipping on Canarian sweet wine, anise liqueur and ron miel (honey rum) to ¨keep warm¨ on the ¨chilly¨ (21°C/70°F) autumn evening.

As in mainland Spain’s All Saint’s Day commemorations, the family matriarch is typically the one who takes charge of remembering the family´s finaos.

The grandmother (or eldest female in the family) is charged with bringing the family together, sharing anecdotes about loved ones who´ve passed, and preparing the early evening snack, or merienda, obviously featuring chestnuts. 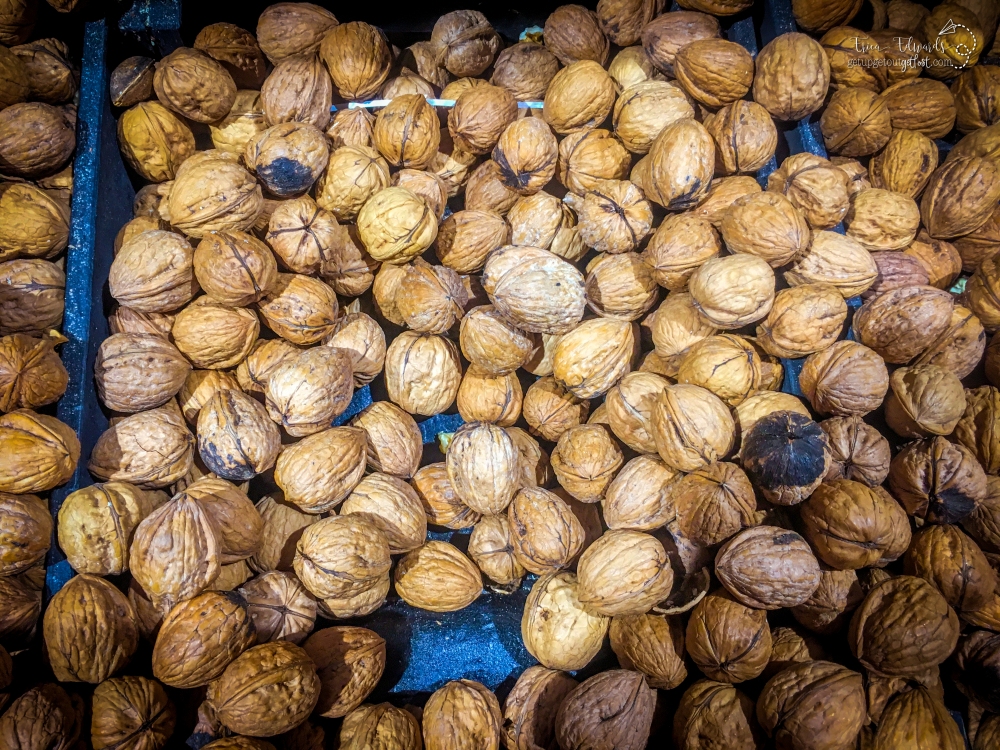 In one tradition, youngsters visit neighbors asking if there are saints in the house (¿hay santos?) and the neighbors drop a handfull of figs, almonds, walnuts or chestnuts in a bag. It’s like trick or treating with a protein punch instead of a sugar high.

As evening becomes night, El Baile de los Finaos begins, filing the street with music and dancing. The musicians strum the rich melodies of malagueñas and Ranchos de Ánimas – Canarian folk songs dedicated in honor of deceased loved ones, particularly bringing to life the  love for a mother that has passed away.

In Gran Canaria, Teror, Valsequillo and San Nicolas de la Aldea are best known for their ranchos de ánimas, strummed on local instruments like the timple, guitar and triangles.

Last year I celebrated my first Finaos in Vegueta, the charming, historic center of Las Palmas de Gran Canaria. Not knowing exactly where the action would be held, we stumbled around the old town until finally we heard the lovely malagueña melodies and smelt the aroma of chestnuts roasting on the open fire.

We followed our senses to Calle López Botas – a side street just off of the well-known Calle Mendizábal where the weekly Tapas Thursday is held. The little road opens up to a tiny plaza just in front of the city hall, and it´s here that the association of the Casco Histórico Vegueta-Triana Unión hosts their annual Finaos celebrations.

This year, the festivities are scheduled to start at 20:00 in the Parque San Telmo, where a small parade of local musicians will lead the way to Calle López Botas, where more than 100 kilos of chesnuts wait to be roasted, relished and washed down with honey rum.

The barrio of San Lorenzo in Las Palmas also hosts quite a good event every year. It’s easy to catch a bus to the San Lorenzo neighborhood and follow your nose to the festivities in the main plaza.

Ever seen a #chestnut pod? Before you can follow your nose to the sweet smell of #roastedchestnuts at the Christmas markets, someone has to crawl around the forest to find these spiky little porcupine pods to get the nutty goodness inside.

Finaos is celebrated throughout the Canarian archipelago, but as Gran Canaria is my sepecialty, I´ll stick with that one.

So far I´ve only experienced Vegueta´s festivities, but my Canarian colegas have recommended that this year I expand my horizons to the more authentic festivities in Santa Brígida, San Mateo or Teror.

While many town hall websites have yet to publish official information on this years´ Finaos festivities (¨mañana¨, in typical Canarian fashion), the following cities have been known to host annual Finaos celebrations. I´ll update this space as more information becomes available.

Agüimes in the southeast of Gran Canaria will be celebrating in the city center from 19:00, with roasted chestnuts and traditional tales to be passed down to the little ones.
Arguineguín celebrated last year at 19:00 in the Plaza Perez Galdos.
Gáldar
Guía
Ingenio
Las Palmas de Gran Canaria will be celebrating in the heart of historic Vegueta starting from 20:00.
San Bartolome de Tirajana (near Maspalomas & Playa del Inglés)
Santa Brígida
Santa Maria de Guía at La Plaza de las Huertas.
Telde
Tenteniguada and Valsequillo typically do the neighbour thing and celebrate together.
Teror´s festivities come highly recommended. There´s also been known to be festivities in nearby Finca de Osorio.
Vega de San Mateo is apparently one of the best!

As the Canarian community works to dust off these traditions and bring Finaos festivities back to the foreground, there´s been a bit of controversy considering the with competition Halloween.

It should come as no surprise that Halloween has begun to creep it´s (skeleton fingers?) into Spain over the years, which is all well and good… except when the date coincides with a local, traditional festival. Especially one that´s meant to celebrate and honor the dead, as opposed to douse oneself with vampire blood and zombie makeup.

While much of the older population is eager to dust off the nearly forgotten Finaos festivities, many of the niños prefer the spooks and ghouls that they see on TV and films. And why not? If I were 10, I´d probably prefer Snickers in my candy sack as opposed to a handful of figs. (For the record, grown up Erica would absolutely go with the figs!).

Globalization is real and with the increased movement of people, cultural icons and overall connectivity, we will have to continue finding a balance to learn and appreciate the new, while honoring and respecting are own histories.

For the last two years, the capital city of Las Palmas de Gran Canaria celebrated with a bit of both – little ones trick or treating on Calle Triana, a musical ¨of blood and fire¨ (Don Juan Tenorio) in Plaza Santa Ana and a Finaos procession complete with traditional tune and chestnuts behind the market.

Perhaps compromise is the best way to go?

Which holiday will you be celebrating at the end of October?

From Finaos in the Canaries to Halloween haunts in the states & UK and Día de los Muertos in Mexico, it seems that the autumn equinox and end of harvest season has been inspiration for festivities all around the world. Afterall, it was believed in several ancient cultures that at this time of year, the barrier between the living and the dead in the thinnest than at any other time of year.

What holidays have you celebrated around the world in late October/early November?
What autumn holidays are on your bucket list on the world? I’m still dying to get to Oktoberfest in Munich!
Have you ever celebrated Finaos on any of the Canary Islands?

Click here for more information on events happening in Gran Canaria this October.

And here you can find a full calendar of events for November!

Many thanks to my students and colegas for sharing their Finaos tales with me, and thanks to these blogs for their invaluable info: