Touchdown!
Score Big with These 4 Super Bowl
Activities for the ESL Classroom

To be honest there are very few things in this life I care less about than American football… (Sorry not sorry?? 😏) I suppose that’s why I was banished to Europe where my beloved fútbol reigns supreme… GOLLLLLL ⚽!

Personal tastes aside though, the Super Bowl is a big part of American culture and thus relevant for English classrooms abroad. Gotta give the people what they want, right?

So while American football is in no way my expertise, I have found a few ways to bring it into my classroom in an entertaining way, though admittedly focused on the good stuff (the ads, of course!)

If you’re following this blog (as you should be 🙄), you may remember this game from my Halloween and New Year activities. What can I say, if it ain’t broke, don’t fix it!

I usually use this activity about once per term since it’s such a fun way to practice listening skills and forming questions while having a good time. A little friendly competition never hurts, especially when dealing with teens!

I start off showing them this graph and we have a bit of a discussion about how expensive it is to advertise during the Super Bowl:

Do you think it’s worth it?
How many people do you think see the ads?
What type of companies do you think advertise?
Have you ever seen any Super Bowl ads?

Next, explain that they’re going to watch some of the most popular “trending” ads from the 2019 Super Bowl. Tell them they need to take as many notes as they can about all the small details they see and hear and that the more details they find, the more likely they’ll win.

Play the video once. Walk around the room to make sure they’re taking notes.

Explain to them that they’ll use their notes to make questions to try to stump the other teams. Demonstrate by asking them a question from the video and having them answer to confirm understanding, IE:

What color shirts are they wearing?
How many actors are in the commercial?
What is the hashtag?

After a second viewing, give them 3 – 5 minutes in groups to create about 3 questions based on their notes. Have each group ask their questions to the opposing teams.

+1 point to each group who answers correctly, or +2 points to the asking group if they stump the other teams.

Here are a few 2018 Super Bowl ads that my classes loved:

I´ll update this post with my fave 2019 Super Bowl ads once the big day comes.

2. Build Your Own Super Bowl Ad

This one might be a bit of a stretch as far as how much it relates to the Super Bowl, but it’s fun, gets them thinking creatively, and is a perfect excuse to watch Super Bowl ads in class 😉

Talk a bit about the relevance of Super Bowl ads in US pop culture. I like to use this chart as a visual, showing that the ads are the second biggest reason people tune in.

Next, play an example of one of your favorite Big Game ads starring celebrities to show them a bit of the creativity that goes into creating a trending advert. I’m obsessed with this one staring Morgan Freeman and Peter Dinklage. As a class, discuss  why they use big celebrities, why they chose those actors and what hashtag they chose.

Break them up into groups and have them choose products out of a hat (detergent, a car, a soft drink, etc.). Bonus points if you choose Spanish products like Cola Cao, Clipper, etc. – they always get a kick out of that!

Explain to them that they have to create a “trending” Super Bowl ad for their product. Each group must:

Afterwards, each group presents their ad idea to the class and the class chooses the best one.

I’ve never had time to do this extension activity, but I always though it would be cool to turn this into a video project and actually have them make their ad! If you have time to make this happen, I’d LOVE to hear about it! 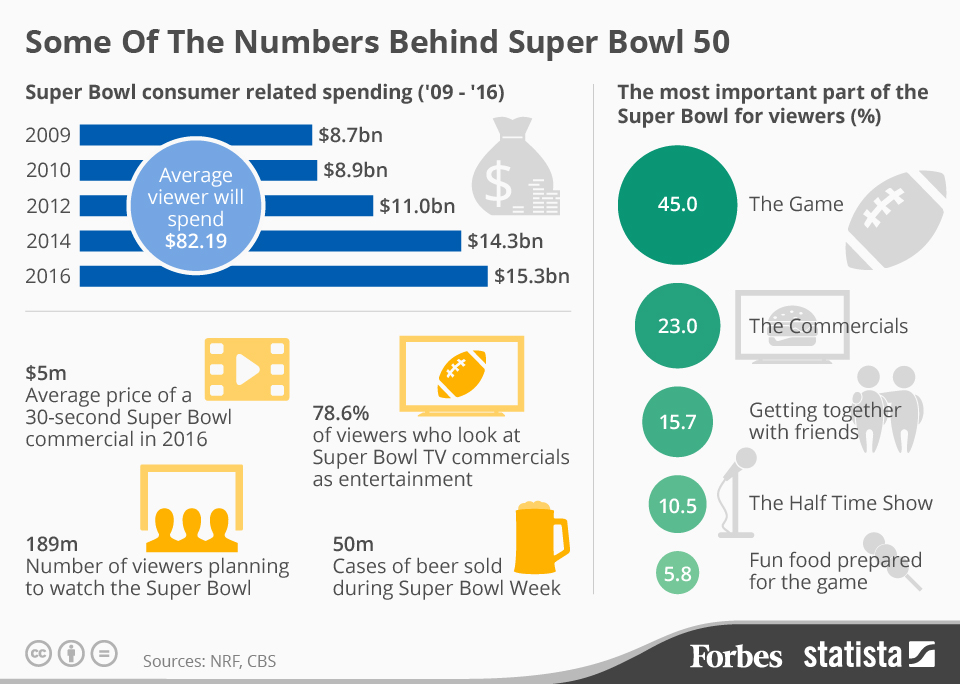 Learning to read charts and understand statistics is a great skill for teens to practice, and there are TONS of interesting infographics out there relating to the Super Bowl.

Depending on your class size, level and behavior, there are a couple of different ways you can discuss infographics.

If your students have a lower level, it may be best to project the images and have them discuss what they see – first in pairs and later as a class.

Ask them questions to show that they understand the data, specifically using comparatives & superlatives. Also, prep some open-ended questions so they have plenty to talk about.

There are a bunch of great infographics online. Here are a few that I’ve used:

If your kiddos have a higher level (or after they’ve done a couple all together), pass out an infographics sheet to each pair or group. Tell them that they need to analyze and understand the data so that they can explain it to the class. Let them know that they’ll need to use comparatives & superlatives, as well as give an overall analysis and opinion about their data.

Later, have them come up in pairs to explain their infographic to the class.

If they have a high level (bachillerato, for example), follow the steps for the above activity, but instead of simply presenting their data, their classmates will have to listen for detail and draw a graph based on what they’re classmates present. This is great listening practice and will keep all of the class engaged. 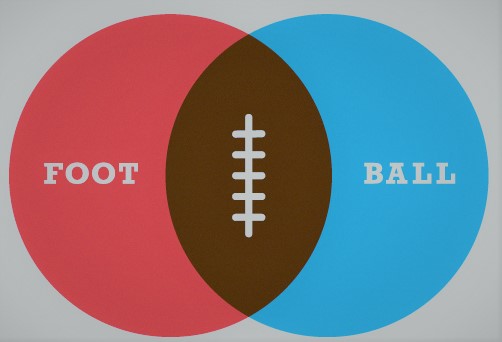 If your anywhere that’s not the US, chances are your students care a lot more about fútbol (IE, soccer) than they ever will about American football. Letting them use that prior knowledge while presenting a new concept helps build confidence and inspires interest. You can do some great comparing and contrasting activities related to the two sports. Feel free to throw rugby in their as well since they often tend to confuse rugby and American football!

First of all, find out what they already know. Draw a big Venn Diagram on the board and ask them to tell you any similarities and differences they know about American football vs. fútbol. Jot them down.

Once they have a solid idea how Venn Diagrams sort data, project images with more differences and have them continue comparing and contrasting in their notebook. Rather than one giant Venn Diagram, I prefer to have them draw several smaller ones to teach them to compare apples to apples rather than to oranges. For example:

is a much better comparison than:

“In American football the players wear helmets, but in Spanish football there are no cheerleaders.” 😏

Start off by projecting two images, one related to American football and another related to soccer. For example:

Once they have some solid data, have them write out some comparative statements. Encourage them to use vocabulary like but, although, both, similarly, etc. This activity is great practice for the Cambridge PET.

And that’s all I got for ya! Perhaps they’re not my most inspired ideas (have I mentioned American football is possibly the most boring sport in existance 🏈?), but my students enjoy it and I’m sure yours will too.

I’d love to hear how it goes for you below 👇, or any other Super Bowl activities that have worked for your classroom… especially if you actually know and enjoy the game! And  as always, don’t forget to follow me for more ESL Lesson Plans 📚 and adventures ✈ in the Canary Islands, Spain and the world 🌍!

There are tons of cultural events to share with your kiddos over January & February, so in the meantime feel free to check out some of these activities:

🎭 Carnaval in the Classroom 🎭

🏆 And the Winner In… You! For Bringing the Oscars Into Your Classroom 🏆
(coming soon)